ABOVE: A mammalian cell infected with SARS-CoV-2, showing the formation of compartments where viral RNA is replicated (top left) and individual virions exiting the cell (right)
EMILY BRUCE

Viral proteins encoded by SARS-CoV-2 disrupt critical components of human cells’ molecular machinery and disable responses to infection, according to a study published October 8 in Cell. Researchers in the US describe how specific viral proteins bind to human RNAs involved in RNA splicing, protein translation, and protein trafficking, and in doing so suppress the host cell’s coordination of a key antiviral defense known as the type I interferon response.

The study offers a possible mechanistic explanation for the blunted immune responses observed in some COVID-19 patients, says Benjamin Terrier, an immunologist at Cochin Hospital in Paris who was not involved in the work. The researchers “are clearly demonstrating how the virus is able to impair the production of proteins involved in [this defense].”

In the type I interferon response, a cell that has detected foreign genetic material in its cytoplasm launches the production and secretion of interferons—signaling proteins that go on to trigger the expression of hundreds of antiviral genes.

Studies by Terrier and others have reported that patients with severe COVID-19 often show a huge reduction in interferon production, suggesting that the virus’s success might in some cases be linked to an ability to disrupt this cellular defense.

Caltech biologist Mitchell Guttman, along with Dev Majumdar of the University of Vermont’s Larner College of Medicine and colleagues, discovered just how SARS-CoV-2 might be doing this while studying interactions between the virus’s 27 known proteins and human RNA in vitro.

The researchers had inserted the genes for each of SARS-CoV-2’s proteins into different sets of human cells, such that each cell would produce just one viral protein. Then, the team had extracted those proteins along with whatever RNAs they’d bound to and studied the interactions between the molecules.

The researchers found that 10 of the virus’s proteins were bound to RNAs involved in critical cell processes such as RNA splicing, protein translation, and protein transport. To the team’s surprise, Guttman says, as many as four proteins bound specifically to structural noncoding RNAs that make up the cell machinery in charge of coordinating those processes.

The viral protein NSP16, for example, bound to a host RNA sequence in the spliceosome in a way that rendered the complex unable to recognize RNA transcripts, let alone splice them properly. NSP1 bound to the ribosome in a position that made it impossible for mRNAs to enter—essentially “putting a cork” in the protein-translating structure, Guttman says. And NSP8 and NSP9 bound to and interfered with the signal recognition particle, a structure that helps transport newly translated proteins around the cell.

Based on these results, the team predicted that infection with SARS-CoV-2 would drastically reduce splicing, translation, and protein transport in human cells and would consequently suppress the interferon response, which relies on boosting these three processes. Indeed, lung epithelial cells infected with the virus showed just that, the researchers report in their paper.

Christian Münch, a cell biologist at Goethe University Frankfurt who was not involved in the work, praises the study’s comprehensive description of the basic biological mechanisms underlying these effects. “This is one of these nice examples where very nice methods were [applied to] this new virus to look at what actually happens in the cell after infection,” he says.

As the researchers note in their paper, Münch adds, the study did not rule out a role for other pathways in helping SARS-CoV-2 evade host defenses or examine potential interactions among the viral proteins themselves. He adds that future work could look more into how the effects develop over time from infection.

Guttman says the team is interested in possible therapeutic implications of the study’s results. One route could be to target viral proteins such as NSP1 with drugs that stop them interacting with cellular apparatus.

The researchers are also investigating how the virus—which is dependent on the host to get its own RNA translated and its proteins transported—manages to replicate itself in such a severely compromised cell, says Majumdar.

“We want to understand how the virus can disrupt host cell machinery and yet be able to engage ribosomes, be able to engage the trafficking machinery—all these things that have been shut off,” Majumdar explains. “What are the signals being presented by the viral mRNAs to basically give it a ticket to ride on all of those machines?”

Preliminary data indicate that distinctive loops in the structure of SARS-CoV-2 mRNAs could be acting as those signals, Majumdar says. Hitting the loops with small-molecule drugs might help block viral activity inside infected cells, he adds.

Terrier notes that most therapeutic strategies for SARS-CoV-2 focus on stopping the virus getting into cells, rather than dampening viral activity within already infected cells. “Since SARS-CoV-2 is really acute, I think the most important [thing] to do is to block the entry of the virus,” he says. “If you are really efficient at that, you don’t need to be as efficient” in targeting intracellular responses.

But the team’s data offer crucial mechanistic information to inform future research on this and closely related viruses such as SARS-CoV (the virus responsible for the 2003 SARS outbreak) and Middle East respiratory syndrome coronavirus (MERS-CoV), he adds. “Trying to [understand] how the virus could determine the severity of the disease, the fact that it could paralyze the immune system—clearly that’s very important.” 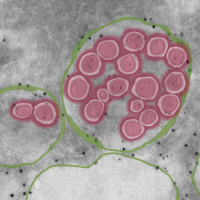